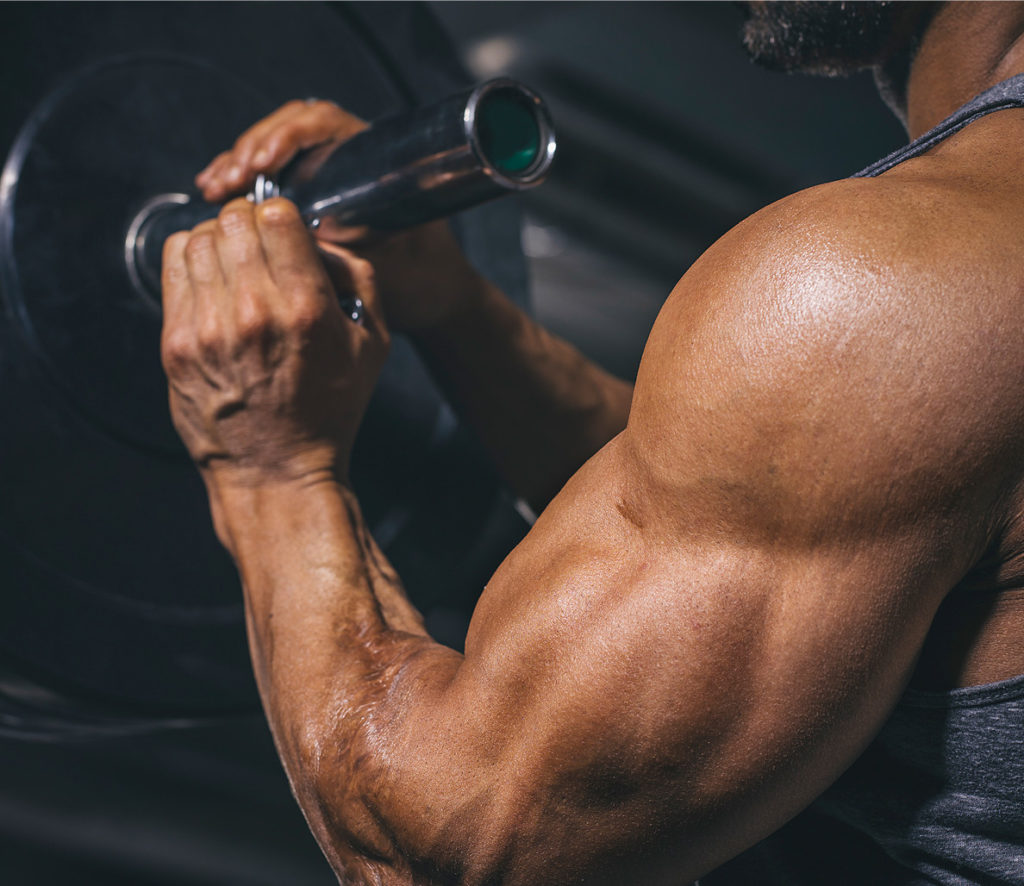 Increase the volume of muscle cells

Nothing is more satisfying after a workout than congestion or pumping of the worked muscle. This lets you know that you have done a good job in your training session. Sometimes the muscle being worked is so “pumped” that even a slight movement is challenging and you can “literally” feel the blood rush through your arteries.

The fact that our muscles tend to feel full during higher volume sets and after workouts is not a coincidence. A full and congested muscle is an anabolic muscle and an increased muscle cell volume indirectly works as an engine for muscle growth.

It is generally assumed that the best way to bulk up your cells is to get big pumps in the gym. The volume of the cells and the pumping although they are related to each other, are not the same thing. Whereas the volume of the cells refers to the actual volume of water within the muscle cells, a pump or reactive hyperemia, in physiological terms it refers to an increase in volume in the areas between and around the muscle cells also called the ‘ interstitial area » 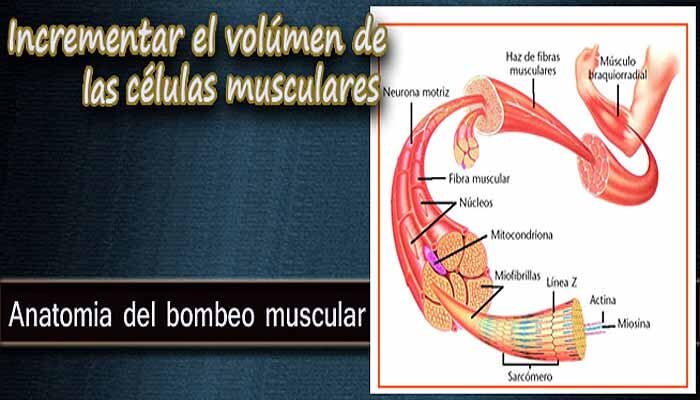 Despite this distinction, receiving heavy congestion can, under the right circumstances, facilitate increased cell volume. Cell volume is critical to getting amino acids into the cell, activating protein synthesis and suppressing protein breakdown during critical times: before, during, and after training.

The anatomy of a muscle pump and cells

In response to high intensity exercise, vasodilation increases by having a greater blood flow, this increases the supply of oxygen and nutrients, as well as the elimination of waste products in the worked muscle. This reactive hyperemia results in an increase in blood plasma in the areas (in-between and around) the muscle cells (the interstitial space).

The combination of increased blood plasma and the accumulation of lactate and other metabolites increases the osmolarity of the interstitial fluid. This creates a concentration gradient that pulls additional water into the blood, creating the phenomenon we all know as well as “pumping.”

Increasing the solute concentration on one side of a semi-permeable membrane will diffuse its gradient when water is added to it. This concentration will last until the system reaches equilibrium. Similarly, when muscle tissue undergoes a pump, the increased osmolarity of the interstitial fluid will attract water to diffuse out of the muscle cells, effectively reducing cell volume.

Fortunately, skeletal muscle is very well equipped and prepared to deal with this. Through a process known as regulatory bulking (RVI), muscle cells are able to maintain or even increase cell volume, despite the increased extracellular osmolarity that occurs during muscle pumps.

Understanding how this works can be quite difficult as it is academic but essential to harness the anabolic power of cell volume. Cell volume increases during muscle congestion through the coordinated activity of two transporter proteins located on the cell membrane.

In the first step, the sodium-potassium (Na + / K +) from muscle congestion moves three sodium ions out of the cell, in exchange for the influx of two potassium ions. Because the sodium concentration is typically 10-20 times higher outside of cells compared to inside. Energy is required in the form of ATP to pump sodium out of the cell, against its concentration gradient.

In the second step, another pump associated with the membrane called (sodium-potassium-chloride co-transporter), simultaneously transports a sodium ion, a potassium ion and two chloride ions out of the cell and into it. itself.

How to increase the cell volume

By consistently shifting this balance toward protein synthesis, we win the war against muscle growth, adding new size and strength. Because protein turnover increases substantially in the minutes or hours after training, what maximizes cell volume is optimal nutrition for long-term progress.

This is obvious. Adequate hydration is necessary for optimal cell volume. The ability to activate protein synthesis and suppress protein breakdown during the pre-training period are both dependent on it. If you arrive at the gym dehydrated and leave anyway, performance and recovery will suffer.

In order to get water into cells to increase cell volume, we also need osmolytes, which are osmotically active molecules that pull water into the cell. To this end, one must maintain optimal levels of sodium, magnesium, and potassium. (In addition to chloride, calcium, and phosphorus.)

Sodium and potassium are required to increase the volume of cells and the absorption of amino acids. The most recommended is not to run away from sodium pre-or post-workout. Blood volume is highly dependent on sodium levels, for example: If we have not consumed any sodium, the congestion or muscle pumping that we will obtain during training will be almost non-existent. (Magnesium is also very important for pumping)

It is difficult to have a discussion about cell volume without mentioning creatine , it is stored in muscle cells as phospho-creatine and supplies a phosphate group to regenerate ATP during high intensity contractions .

Amino acids are themselves osmolytes that, when transported into cells, pull out additional water, increasing the volume of the cells.
Insulin not only activates amino acid transport, but also increases cell volume through induction glucose uptake. While the timing of the macronutrients is important, there are other considerations that need to be made in order to maximize the potential for cell volume. 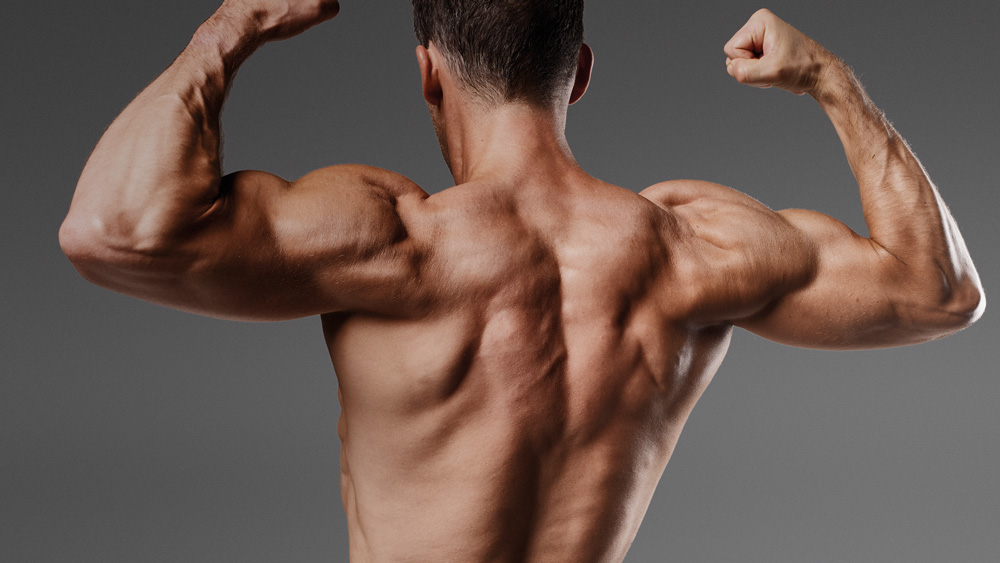 While cell volume is a critical factor for muscle growth and recovery, the real magic occurs when a bulky muscle is placed under great mechanical stress.

By now you can see how training a bulky muscle creates a highly anabolic state. Put this muscle under heavy load with time under tension and it will increase amino acid absorption and protein synthesis. Put adequate nutrition, a training executed to perfection and we will obtain the results we are looking for (yes, give it time) …